100% American Owned and Operated since our beginning in 2001. 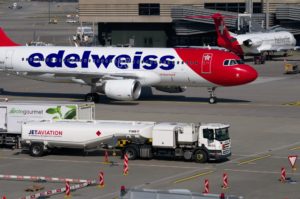 When it comes to jet fuel, what you can’t see can hurt you.

Contaminated jet fuel causes engine flameouts, fuel gauge malfunctions, and other fuel system difficulties. In May 2019, a Cessna C550 on an air medical flight experienced a total loss of power in both engines because diesel exhaust fluid had been confused with de-icing fluid, which looks the same.

Because much of what contaminates fuel isn’t visible with the naked eye, jet fuel testing ensures what goes into an airplane tank is only what should be there. It’s a critical step, so you want to make sure you have it done right and done well.

When looking for a jet fuel testing company, the highest quality control standards are critical. Here are a few things to keep in mind as you consider your choices.

Testing jet fuel works like any other kind of technical testing in that there are various standards to meet. These standards are set by several different groups for conventional jet fuel. you need standardized, world wide accepted testing that is very specific and acceptable to the jet fuel handling industry.

The most commonly used specifications and practices for Jet A or Jet A-1 include:

For the most part, these standards are fairly similar because they deal with the same product. Minor variations in test limits can be dealt with by using the AFQRJOS checklist as it incorporates the strictest elements of ASTM D1655 and DEFSTAN 91-91.

Other specific standards deal with the more than 30 tests that might be done on your fuel, including checking sulfur levels, acidity, and freezing point, among others. You will also want to find out what standards the lab and its equipment are held to.

States the lab operates competently and delivers valid results. That level of certification ensures your test results will have international approval.

Not only do you need a service that knows how to test jet fuel, but they also need to be testing that fuel for the right things. In some cases, the what and how of testing is handled by following standards, but it’s good to have a basic understanding of what you should expect a service to provide.

When you talk to a testing company, ask about how they stay on top of new issues that arise and require testing, such as discovering the DEF in the Ohio incident.

While your fuel might have a low water content upon delivery, sitting around in storage provides ample opportunity for for water condensation to get in fuel. This could be rainwater leaks or damp outside air flowing in. Even a temperature change in the fuel itself can increase the chances of water condensing and changing the fuel makeup.

Particulates include dust and dirt, an inevitability despite new protective coatings on the interior surfaces of pipes and tanks. Airborne solids like dust and pollen or rubber from damaged hoses can also contribute to contamination.

Accidental contamination with DEF continues to be a possibility as changes to the standards for diesel vehicles at airports means it is on hand more. Another new contaminant being encountered is Fatty Acid Methyl Ester, which tends to show up when biodiesel fuel passes through a common fuel distribution system.

Microorganisms from air and water can get into the fuel and form solid debris that plugs fuel filters. The most common ones found are bacteria, yeasts, and fungi.

Most commercial aircraft run on conventional turbine fuel called Jet A or Jet A-1. It comes directly from crude oil. Any testing company will be able to handle standard testing on this type of fuel.

Alternative fuels that are semi or fully synthetic have been added to the ASTM and DEFSTAN standards. More are on the horizon based on non-petroleum materials such as coal, biomass, and even algal growth. If you’re considering a move to one of these fuels, you need a company that ensures its tests and procedures keep up with fuel innovation.

Cheap jet fuel testing can become problematic. You need a service that is open when you need them (including holidays!) and can perform tests now rather than later. A good service is going to be able to come on-site to pull samples for you and get them off for testing quickly.

The Final Word on Testing

An airplane engine is sensitive to any contamination in the jet fuel. Ensure your fuel product remains up to standards and safe for flying with proper jet fuel testing conducted at appropriate points along the supply path. The best testing services will be able to work with you and provide tests to the standards you require and to suit your timeframe.

If you are looking to add testing to your safety protocols, contact us to get a quote on our ISO accredited service.